Interview With James Barnia, The Painter Behind The Painting

Audiences for the joint Latino Theatre Projects and Burien Little Theatre production of Beauty Of The Father will have noticed the projections that show the progress of the painting Emiliano is creating of Frederico Garcia Lorca during the course of the play. Lorca was a Spanish playwright and poet who was killed by the fascists during the Spanish Civil War. As the play progresses, and we learn more about the characters and their relationships, the audience sees Emiliano’s work take shape in the projections.

Lorca’s ghost (Santiago Garcia) stands near a projection of a sketch for Emiliano’s painting of his death during dress rehearsal for Beauty Of The Father, July 31, 2013. Photo by Craig Orsinger for BLT.

As I wrote last week, though, the projections don’t show all the subtle colors of the painting local painter and BLT volunteer James Barnia created for the show. Rather than let that work go unseen, we’ve added a photoset on the BLT Flickr site that shows the painting in its various stages. James photographed the painting at several stages, and then re-created his initial pencil sketches and photographed them as well at the request of play director Michael D. Blum, so the audience could better see a painting taking shape.

Click on the image to the left to see it in a larger size. Even though that’s the pencil sketch, it doesn’t show all the subtlety of the original: 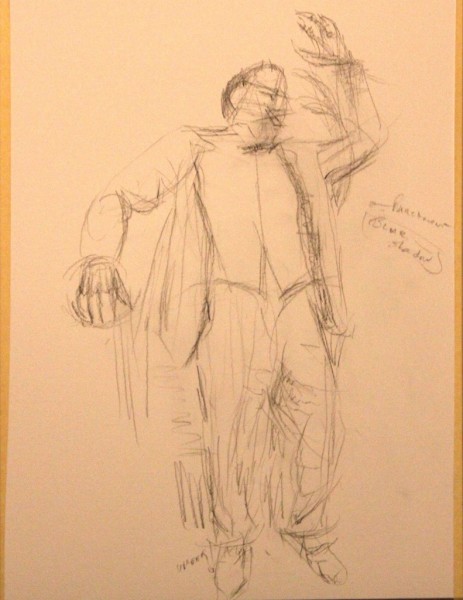 The pencil sketch of Emiliano’s painting of the death of Lorca. Used in modified form for the LTP/BLT production of “Beauty Of The Father”. Sketch and photo by James Barnia – used by permission.

Actor Santino Garcia (Lorca) in front of a projection of a picture of Lorca’s death. Publicity photo of LTP/BLT production of “Beauty Of The Father” by Michael Brunk.

This photo shows Santino Garcia next to a more complete likeness of his alter ego, Lorca, during a later scene:

The colors are mostly there, as is the shadow of Lorca that, presumably, is being cast on the wall he was being shot in front of. The bullet wounds are not yet painted. They only appear in the final version of the painting.

Here’s a reduced size copy of the original photo of that phase of the painting: 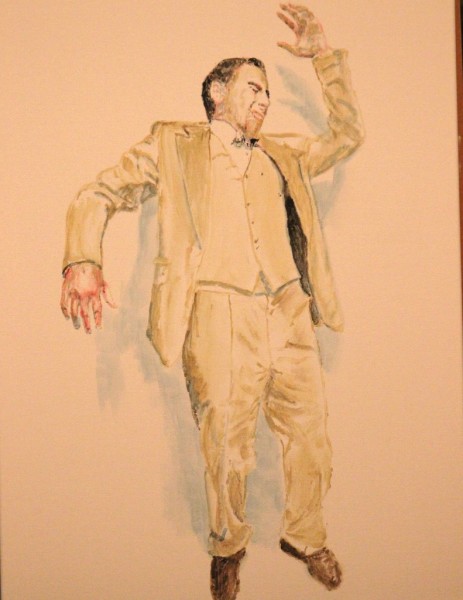 Portrait of Lorca from “Beauty Of The Father”, with most color and some shading. Painting and photo by James Barnia – used by permission.

All the original photos are available in full resolution at the Flickr set. The images here are at a reduced size suitable for blogging.

As a BLT volunteer for several years, James Barnia has helped us by creating a number of set pieces and props. Many have been woodworking projects of one sort or another, but a few have been more artistic in nature. I conducted a short interview with James by e-mail to ask him about his work on Beauty Of The Father, and other aspects of theatre work:

BLT: You’ve done wood projects (repairing and modifying furniture, making shelves) for us in the past. Is painting more fun?

JB: Yes painting is more fun. The carpentry I do because I can, it’s needed, the painting is a desire.

BLT: Did you learn much about the subject of the painting, (Spanish artist Frederico Garcia Lorca) while doing it?

BLT: While the figure of Lorca in the painting looks very realistic, the background is a warm color, not something that resembles a mass grave. Was that an artistic choice, or a practical one?

JB: I originally painted Lorca with a wall behind him but found it distracted from the figure. So the minimal background would be a practical one.

BLT: I’m told the pencil sketches that are the first projections to appear were requested later by Michael Blum, the director. Were they difficult to reconstruct?

JB: The sketch was the easiest part by far. The hardest part of the series was capturing the character’s face, though deciding how much blood to add was a close second! 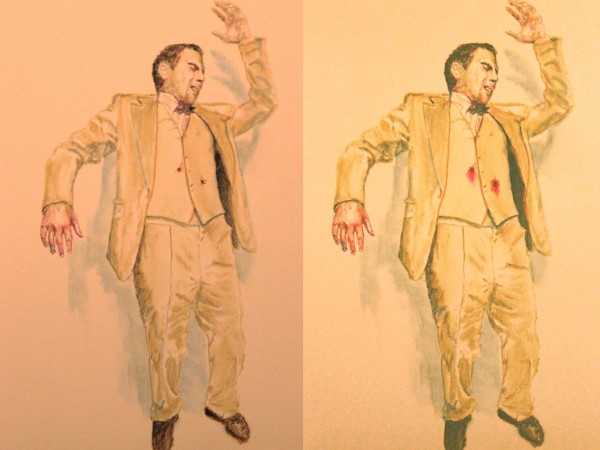 First and final versions of Lorca’s wounds. Painting and original photos by James Barnia. Combined and processed by Craig Orsinger for BLT.

BLT: Is this your first painting project for a visual arts project?

JB: My first visual art project was probably in 4-H, but there have been others as well as local signage work and seasonal window painting.

BLT: Do you sell your paintings?

JB: Many of my paintings are for sale. Buy my art before I’m dead, it’s cheaper that way!

BLT: Do you exhibit your paintings anywhere?

JB: My art is not currently on display, but was recently displayed and sold in Portland and I have displayed in the past. I am currently evaluating the local market and options. Inquiries welcome by e-mail. My user name is “jbarnia2”, and the e-mail server name is “gmail.com”. [Ed note: I actually changed that answer so the e-mail address cannot be parsed by spambots and the like. An e-mail address consists of a user name, followed by an ‘@’, followed by a server name. James welcomes serious inquiries sent to that address.]

This entry was posted in Shows and tagged Beauty of the Father, interviews, volunteers. Bookmark the permalink.